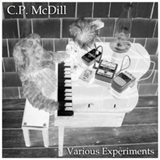 A compilation of recent sound experiments by C.P. McDill that fall outside of the style of his main recording projects.

About the album:
"For the past year and a half, I've been recording many sound experiments that don't fit in with my usual stuff. I can to some degree credit this to an ongoing creative challenge project called Disquiet Junto, which has gathered a large community of experimentalists over at Soundcloud (soundcloud.com/groups/disquiet-junto/). Each such piece is noted below.

In addition to the work I did with Junto, there were numerous experiments I made while getting familiarized with the possibilities of newly acquired musical instruments or effects hardware. Revisiting the tracks I've done in this time, I selected a number of them that I feel are worth compiling into a proper album, a nice way to showcase the diverse ways I've been fooling around with music and noises.

In a manner of speaking, this album is a sequel to Covert Ecology, which brings together some experiments I did 20 years ago, my oldest surviving recordings.

As a departure from my usual approach to presenting my work, I'm going to explain as best I can what I've done in each track:

01 Drone-a-gram [03:16] -- Junto. The word "drone" was translated to morse code, then made into beats. A bassier, more resonant beat is the dash, and a punchier beat with a short decay is the dot. To represent the spaces I used a short hiss (aerosol spray can). The accompanying drones were made from a variety of sound sources and processes.

02 Revenge of the Lawn [03:27] -- Junto. A field recording with some processed sounds mixed in. The site of the field recording in this track was a garden near Cape Cod on a warm day, standing by the entrance of a greenhouse, where a lot of flies were buzzing nearby.

03 Shed Inhibitions [03:56] -- From a Junto assignment to make music from junk. For this project I used a very dull wood-saw, a rusted compass saw, a scrap of sheet-metal, and an empty plastic bottle. The parts were recorded right in the shed with my trusty Tascam DR-05 Linear PCM Recorder. No effects were applied.

04 Trunk Call From Byzantium [03:28] -- Junto. Schoenhut toy piano, recorded via a circuit-bent vintage telephone handset used as a microphone, passing through a Fender Hello Kitty portable practice amp (set on overdrive), then into a Tascam DR-05. The resulting wav file was further degraded by conversion to an 8kbps mp3, then back to a wav. Then I messed around with the playback speed and pitch of the file. Mixed into this is another track of the Schoenhut recorded as above, un-degraded and at normal speed, with delay effect added.

The source material for this track was provided from these two samples:
*A_c#minor_bminor_E_chord_progression_on_guitar_with_echo
freesound.org/people/UncleSigmund/sounds/30266/

06 Half Beasts and Half Devils [04:43] -- Junto. I took a very brief sample from a Librivox (public domain) reading of "The Autobiography of Benjamin Franklin" and processed the hell out of it in a variety of ways and layered it all together.

07 Uchezaji [03:44] -- One day I tried to run my Korg Kaossilator through my Korg Monotron, using the latter as a filter. After a brief bit of fooling around, this recording was a result. The title is in fact Swahili for "fooling around." (see music video)

08 Tripitaka [03:00] -- Junto. This was made from three samples, layered with each other in different ways: 1) A field recording I made of a swarm of darkling beetles crawling around and chewing on rotting fruit, 2) A loop I made on a Korg Kaossilator, 3) A short chord progression on a toy piano, heavily effected.

09 Fog on Rails [03:29] -- From a Junto challenge, "to create a track using as source material only two samples: a train whistle and a fog horn." Thus, all sounds on this track are processed strictly from these two samples:
* Fog horn sample by Schaarsen: freesound.org/people/schaarsen/sounds/69663/
* Train whistle sample by Ecodios: freesound.org/people/ecodios/sounds/119963/

10 Half Empty [01:38] -- Junto. This track was a single-session live recording of "glass harp" sounds (rubbing the rims of wet wine glasses) with effects applied in the live recording. No post-processing effects used in this.

11 Iced Coffee [04:16] -- Junto. All sounds in this track are processed from a source recording of ice tumbling in a glass. I don't recall what methods I used to get these results.

12 Coup de Soleil [08:12] -- The first part of this track was made using an ebow on an antique zither, recorded outdoors. Several tracks were made and layered, some of which were given a bit of effects processing. The second part was an electric violin played pizzicato style with a guitar pick, the output of which was channeled through a multi-effects processor.